A couple of great chapters in my life has been NEARING its closures, YET bountiful new chapters before me were OPENED already. I cannot agree more to the saying, “What the caterpillar calls the END of the world, the Master calls a BUTTERFLY.”

I remember a story of my good friend of a not so distant past (lets call her Ann). During the time, Ann was longing to take her MBA in a prestigious school (di ko sasabihing Ateneo yun ha, para hindi nyo alam, hehe). Dahil si Ann was a fairly good candidate in terms of performance and reliability sa office, she discussed w her boss her intentions and asked to consider her if there was an opening to take MBA. For 3 long years, she was told “Yes pwede, but there are still seniors who needs to be prioritized.” Faithfully she waited, did her job well and WAITED. Until one day, she was called by the boss and was OFFERED the promise. She was finally granted her request (wuhuuu!) and now going to take her MBA – all expense paid.

So happy her heart was, she encouraged her best friend (lets call her Coleen), who was “lost” at the time, to take the MBA w her. Since si Coleen ay may ‘PINAGDADAANAN” at lost ang peg, doubtful sya. Pagtapos ng maraming pilitan (to the point that Ann offered to pay half of the tuition fees), napa-OO din si Coleen to take their MBA ng sabay.

When all things were set already for the best friends, the DARK clouds ARRIVED! Last minute, sabi ng boss ni Ann, “di ka pa pala pwede this year mag-take ng MBA kase blah blah blah…” For all the reasons being explained, nothing was heard. Aside from the pain in Ann’s heart, she has to address Coleen’s reaction to the UNEXPECTED news. How in the world was Coleen going to take the news? Pagtapos nyang pilitin na mag-MBA, biglang sya yung di pwede? Pano na?

Months passed, Coleen and Ann still met each other regularly, Coleen updating Ann her new adventures in the MBA world. While Ann happily listens to her, she decided, she will also study — on her own. So she bought a lot of books – business and finance-related and started reading them. She also put them into practice and started businesses that eventually lead her to real-life teachers. She failed too (a lot, if I may add) and had her REAL CASH LOSSES in between.

Two years after, Coleen graduated from her MBA and Ann was very HAPPY and PROUD of her and her accomplishments! Ann could not be any happier; she was able to PUSH her best friend achieve SO MUCH! As for Ann, she has her own winnings as well. She had her businesses running and still in the process of learning because she knows, there is NO graduation in the course she took.

In life, we are all striving for BALANCE. Ralph Waldo Emerson referred to it as the “Law of Compensation.” Pwedeng frustrated ka, or sad because of a loss, or disappointed for some reason. During these times, you can immediately search for the counterbalancing POSITIVE ACTION to it.

This is a flawless UNIVERSAL LAW: an OPPOSITE condition must emerge to OFFSET the initial condition. Pwedeng hidden or obvious, BUT IT IS THERE. Creatively SEEK OUT the new direction that will EMPOWER you in a way unlike ever before.

Kaya smile ka na and keep in mind, “When God closes a door, somewhere he opens a window.” 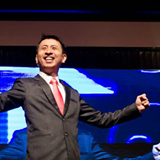